Eight years ago, 400 people gathered at Pacific University to experience the delightful sounds of the choral and percussion ensemble, Voices of Africa.

On October 16 they returned to the Taylor Meade Auditorium and delighted audience members once again with their multiple layers of syncopated rhythms.

The Center for Gender Equity partnered with the Washington County Cultural Coalition and with some help from the Elise Elliot Fund was able to bring this group to campus.

Voices of Africa first started out as a children’s ensemble and is now a “African Cultural Arts Collective,” that has been around for 25 years, putting on concerts, lectures and demo workshops.

They have traveled around the world, performing across the U.S., Canada, Jamaica, London, Hawai’i and Ghana.

Support and family are strong elements in the African community, which is shown in the music and even how the instruments are named.

The first drum that is known as “the Mom” or constant, steady rhythm is called the DjunDjun. It has a lower sound and is made from cow skin stretched across the drum head.

“The Father” drum is called djembe and is louder than the DjunDjun. The hand-held Sakara drum, the sekere instrument, a dried gourd with beads tied to the outside which acts like a maraca and the double-headed bells called the agogo were some other instruments featured in the performance. 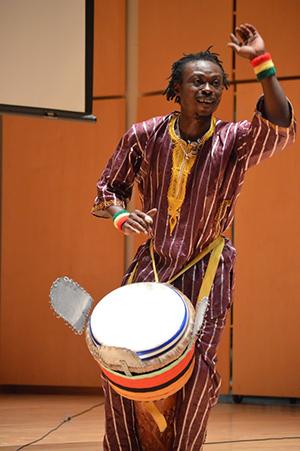 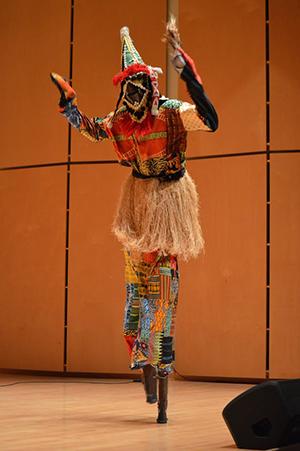 played with the agogo bells to a cake. “One beat is the cake, the other is the frosting, and the third is the sprinkles and then it turns into a yummy cake.”

This person had a good point. Music in a way is a science and in order to make a harmonious song not just any random rhythm can be played.

While there were not 400 people there like the first performance many years ago, the audience loved the show.

“It was great and so much fun! The music made it hard to not clap hands or want to get up and dance,” Freshman Andie Harrison said.

Hopefully the audience’s enthusiasm will keep Voices of Africa coming back to Pacific for years to come.