The credibility and legacy of the Gamma Sigma fraternity is planned to make a comeback during its 150th year.

“I’m really excited about the reform we started this year,” said Gamma president Justin Cornair. “Overall we’ve turned over a new leaf. Everyone’s bought into it and all the guys are really enthusiastic.”

Gamma struggled over the last couple of years to be an active, involved group on campus, but with presidential duties being switched to Cornair this last semester, things will change.

Cornair studied previous constitutions the Gammas have upheld over the last 150 years. From those, he drafted a new constitution, or rather a “newly instowed” constitution.

And with a change in president and constitution things are already looking better for the Gammas.

First and foremost, the Student Senate will recognize Gamma as a club in fall 2013. This means they receive funding, which was not happened before because of their lack of contribution to Pacific or the community.

The Gamma’s want to buy a house again, since their house, which stood across the Lincoln Park Stadium Field, was sold.

But most of the excitement with this “new face” of Gamma will be seen during pledging in the fall. 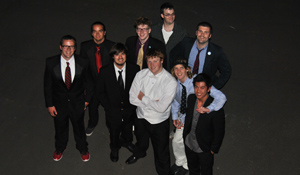 “Pledging is where it becomes real,” said Cornair. “If you need help it’s not hard to find. We have a huge alumni base that’s really active.”

For the 150th year, pledging will be more festive than usual. Cornair said the alumni want to go all out. Plans from having the mayor introduce Gammas at the Homecoming football game to having a special dinner in the multipurpose room for the 150-year celebration are in the works.

To kick off the celebrations, a dinner dance was held by the Gammas and their sister sorority, Theta Nu Alphas on May 4.

The dinner and dance have been a long held tradition with the Gammas, dating back to 1902, where it was originally called an annual banquet.

“Those who attended claimed it the most brilliant social event ever given by the students of Pacific University,” according to a 1905 issue of The Pacific Index.

And that’s not the only tradition that’s stuck over the years.

Pledging was described by Gammas in a self-written informal history as to “put the applicants through various Tortures and amusing stunts.” But today, tortures wouldn’t be the best word to use.

Pledges from the early 1900’s to now still have a task with bow ties. Before it was to wear a specific tie, now the pledges must make their own giant bow tie.

It is still a long-standing tradition to collect bows from girls under garments.

The fraternity’s newly enforced constitution will set up a culture where the Gammas can be respected and much more active on campus, said Cornair.