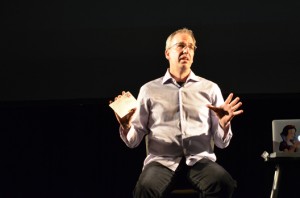 The man known for being the most trusted stranger in America gave his presentation “Post Secret” on May 1. Frank Warren (right) was welcomed to the stage by Center for Gender Equity director Martha Rampton (left). In November 2004, Warren began inviting strangers to share their secrets with him by sending post cards to his home. Warren has since been mailed more than half a million post cards and created five books. His most recent book titled “Post Secret: Confessions on Life, Death, and God” was on the New York Times Bestseller list. Warren shared several post cards that have been posted in his books and ones that were banned. He also discussed suicide, self-hate, eating disorders, loneliness and other issues that have been sent to him as secrets. At the end of the presentation, several members of the audience shared their secrets