This year, under the new coaching of Matt Lydum, the Pacific University track and field team had an overall successful season. Multiple school records were broken and outstanding performances on both the men’s and women’s teams propelled Pacific to place fifth overall at the Northwest Conference Track and Field Championships Saturday April 23.

Junior hurdler Kelsey Lee, along with the 4×400 relay team, rewrote their own school records at this event. The Boxer 4 x 400 relay team beat the previous Pacific record for a second time with a time of 3:59.12. Lee finished second in the 400 hurdles with a time of 1:03.90.

“I really enjoyed track, having done it in high school, and wanted to try and compete for Pacific,” Curl explained.

Curl found success at the Pacific Open, April 16, with a personal best leap of 5-1 in the high jump.

Many athletes from other sports were approached by Lydum and asked if they would be interested in competing this season. Some multi-sport athletes this year were junior Breezy Brookbank, soccer player, junior Jacob Richards, wrestler and freshman Joshua Huffman, a football player and discus thrower to a name a few. 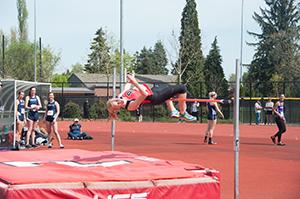 The 4×400 team of Breezy Brookbank, Megan Eberhardt, Jess Knoll, and Marissa Smith just inched past the four-minute barrier to re-write the record book at 3:59.99 at the NWC Championships.

By recruiting within Pacific’s own talent and through outside recruiting, the track and field team improved with each competition and placed at the NWC Championships. They are headed on the right track looking to constantly improve and bring home the championship next year.