Both men’s and women’s tennis teams season have come to an end, with both programs seeing growth and success. Pacific’s men’s team finished the season with a national ranking of 33, but missed the cut of regional play.

With an overall record of 18 wins and four losses, and 11 wins and one single loss in conference play, the men’s team found themselves in the Northwest Conference Championship again this season. Ultimately dropping the contest to the only team to beat them in conference during the regular season, no. 19 nationally ranked Whitman University.

“Although we were really proud of the year that we had, there was a bitter taste in our mouth after losing the finals again,” head coach of the men and women’s team Brian Jackson said.

The men are losing three key seniors this year in Brennan Faith, Ben Ryweck and University of Gonzaga transfer Chris Dalton. Faith acted as the teams number one singles and doubles player, being a major leader for them.

As for the women, they will be losing two seniors from a team that saw its conference record improve from last year to five wins and seven losses, and a seven win, ten loss overall season record. 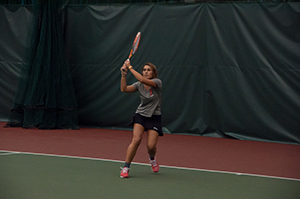 Seniors Carlee Rhodaback and Danielle Wicks will be leaving behind eight returners. Rhodaback finished the season with four singles wins, her last singles match being a win, and added four doubles wins with Wicks being her partner in three of those victories.

Wicks won two of her three singles matches, and three of five doubles matches. Ending her senior season with a winning record in both facets of her game.

“I am really proud of our team this year, and I’m appreciative of the support we received. We had some great crowds at our home matches this year,” coach Jackson said about the support. “We hope to continue providing Boxer fans something to cheer about!”