The Pacific University men’s tennis team is off to a hot start this season with a four win and one loss record and a national ranking of 40.

Pacific also boasts a 2-0 record in conference early in the season.

The team started the 2016 season off with a trip to Ohio where they played three matches winning two out of the three matches.

“The trip to Ohio to start the season against three very solid opponents not only helped motivate the team, but gave the team the tough match experience they needed going into the NWC season,” said Jackson. “I credit our strong start to the work that the players put in throughout the fall and off season. They are really hungry and have really been looking forward to the season.”

The lone loss of the season came at the hands of Denison University, currently ranked 34 nationally, on Feb. 12. Coach Jackson felt that the
tough loss was a result of first game jitters.

“Our excitement may have contributed to some nerves in the first match of the season,” said Coach Jackson. “In the long run, that loss may have helped our team’s focus.”

The Boxers are coming off of two dominating wins against conference opponents Pacific Lutheran University and Linfield University.

The Boxers swept the Lutes nine to nothing and had an impressive showing against the Wildcats with an eight to one final score.

Pacific’s men will continue their four match homestead against Whitworth on Feb. 26 at 4 p.m. in Forest Grove. They follow it up with a match gainst Puget Sound at 1 p.m. the following afternoon. 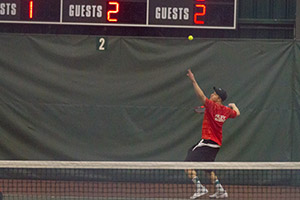