Being American means having to sift through the never-ending flow of conspiracy theories. Perhaps one of the most infamous theories is QAnon. It amassed followings on every social media platform such as Reddit, YouTube, Facebook, Twitter. The theory, first posted to Reddit by an anonymous “Q” in 2017, alleges that a Satan-worshiping ring of pedophiles is plotting against President Trump. QAnon has accused democratic politicians, celebrities, and high-ranking officials of being members of the ring, none of which is based on fact. I’ve never given much credence to conspiracy theories. The theories always seemed so obviously untrue that it was hard to believe that people would buy it.

However, Borat Subsequent Moviefilm enters the world of conspiracy theorists. The mockumentary movie depicts comedian Sacha Baron Cohen acting as a fictional Kazakhstan journalist named Borat. Cohen interacts with unassuming Americans under the guise of his fictional character, and the intention of the character is to mock American culture. Cohen’s interactions reveal a different side of people, tapping into the weird, embarrassing, and outrageously offensive side of humanity.

During the early stages of the pandemic, he stumbles into two men at a gas station, explaining he needs a place to stay. Unbelievably, the men house Cohen and his crew for a week, and the audience gets a glimpse into the lives of two Trump-supporting QAnon conspiracy theorists. They tell Borat that the Clintons drink the blood of children and how they spread the “plague” (a.k.a Covid-19). At one point Borat asks, “Which is more dangerous, the pandemic or the democrats?” To which one of the men responds, “Probably the democrats.” 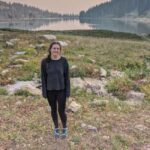 Hannah Kendall is a senior Journalism student from Prescott Valley, Arizona. When she’s not writing or worrying about her student debt, Hannah enjoys listening to music and dancing.