After the West African Guest Speaker Series concluded on March 3, host and Journalism professor Jeslyn Lemke felt that the overall feat was a success that benefited future journalism students and expanded their cross cultural knowledge.

With presentations from renowned West African journalists Emmauel Akinwotu, Partick Fort, and Seth Boateng, students were able to hear from reporters and learn about what reporting looks like in a culture different from our own. Each journalist covered topics like how COVID-19 has impacted their individual regions, how reporting has changed in the time of COVID-19, and how they were able to produce a wide range of coverage in order to tell the story for what it really was.

While there were some obstacles in the development of this series, such as an 8 hour time zone difference and some language barriers, Lemke felt that they were overcome to ensure that the student’s actually gained some insight about international coverage.

“I feel like the students really did get to have that West African perspective and really did get to absorb how coverage is going in Ghana, Ivory Coast, and Nigeria,” Lemke said. “I love that in the responses from students, they said that there are a lot of similarities in how the American public has reacted versus how the West African publics have reacted, so students are making these cross cultural comparisons about how people are the same all over the world.”

Seth Boateng was the opening speaker on February 24, and his presentation covered the issues and disruptions that COVID-19 has caused for Ghanian culture–with funerals and weddings for example–as well as included various photographs that illustrated what it was like to be as a reporter in the field surrounded by those suffering from COVID-19, according to Lemke. He felt that this opportunity to speak with Pacific students gave him the ability to inspire their passion for news.

“It allowed me to show students how to appreciate the passion it takes to practice journalism and how the passion attached to it, at times, makes it calling. It is the reason in spite of all the dangers hovering around COVID-19, we still risk and step out to speak to people and tell their stories,” Boateng said.

Patrick Fort continued the series on March 1, with his presentation about how the general public reacted to COVID-19 and the measures they took to ensure their safety and to try and find a cure. He shared how much COVID-19 has impacted his reporting, specifically regarding his relationships with those he chose to interview while respecting the social distancing standard and mask mandate.

“Being a journalist is finding the facts. Our writing and our presenting changed, and the way we reacted was like if you’re in a war zone. You don’t stand up in the middle of a battlefield, and with COVID, you’re not going to go into a closed room or a stadium with 5000 people,” Fort said. “People tend to be scared of journalists, because we’re wearing masks so they don’t recognize you because it’s harder to have eye contact, and they can’t really see what you’re feeling.”

Emmanuel Akinwoto concluded the series on March 3, where he discussed his coverage of the pandemic, specifically an interview with the gravediggers in Nigeria, where he was able to get behind the scenes to figure out what was really going on with the virus. He also mentioned why his stories tended to have an optimistic angle, which was very contrasting to a majority of the news stories at the time.

“People don’t do things for praise, but when your work gets recognized, it’s such an encouragement,” Akinwotu said. “I remember, I could see that when I was talking to the people who I was interviewing for the story, it meant a lot to them for the work that they were doing to kind of reach a wider audience.”

After hosting this series and seeing its impact on the students at Pacific university, Lemke was inspired to start a podcast where she interviews other journalists about what it’s like to be a journalist right now during the pandemic.

“Journalists have such a rare perspective on the world. They are really interesting people to interview and go behind the scenes with, and I think that could be really cool,” Lemke said. She plans to pitch her podcast to the local radio stations in Portland or run it off of her own website. 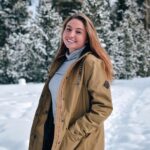