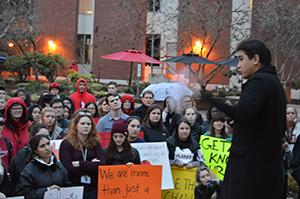 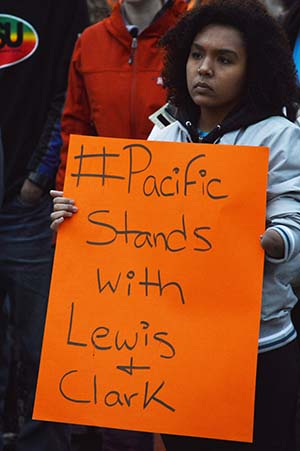 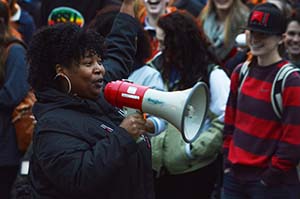 “Injustice anywhere threatens justice everywhere,” chanted Director of Student Academic Inclusion and Faculty Advisor for Black Student Union Yashica Island at a solidarity rally Nov. 22. More than 100 students, faculty and staff gathered outside the University Center in support of the students at Lewis & Clark College who have been targeted by racist comments and bias crimes. Lewis & Clark hit the news recently after students and faculty staged a sit in protest in response to racist comments on the social media site “Yik Yak.” The comments included #bringbackslavery and “I just want to hang you ignorant black people.” After the protest at Lewis & Clark, student Tanguy Muvana was allegedly attacked by three white men and forced to drink a liquid substance. Police told the Oregonian they can not comment on the attack as it is a part of an open and ongoing investigation. In response to the attack and protests, Sociology Professor Daniel Eisen and University Chaplain Chuck Currie helped organize a solidarity rally where students, faculty and staff gathered to show support for Lewis & Clark and to discuss the racism at Pacific. Currie and president Lesley Hallick also spoke at the rally. A group of Lewis & Clark students traveled to campus for the rally to express their gratitude for the event and to speak about the events at Lewis & Clark. Eisen said these kinds of racist acts are not unique to Lewis & Clark and added that continued discussion and commitment not to put up with them are crucial to improving the culture on the Pacific campus. Hallick said she was very proud of the students for organizing and showing support. She said she would like to see a multicultural center be added to the campus to give students of diverse ethnic backgrounds a place to relax and recieve support. Hallick was a part of implementing a multicultural center at OHSU and said it was very successful. She said it is still too early to make plans but she would like to see the center in the newly remodeled Scott Hall.