The Student Health Center will offer the Human Papilloma Virus vaccine for a limited time at $15 an injection to women under the age of 27. Those who have already received one or two of the injections through another provider are still eligible to complete the three series vaccine through the health center. Some health insurance providers may provide reimbursement for the $15 administrative fee.

Since shortly after its 2006 FDA approval and Advisory Committee on Immunization Practices recommendation, the Human Papilloma Virus vaccine has been offered by the Pacific University Student Health Center for $180 an injection for each of the three injection series. According to Director of the Student Health Center Kathryn Eisenbarth, the health center decided to make the vaccine available to students in an effort to “provide [them] with every opportunity to prevent disease.”

Centers for Disease Control statistics estimate that approximately 20 million people are infected with HPV already, and anywhere between 50 and 70 percent of sexually active people will acquire a genital HPV infection at some point. Though some strains may clear on their own, other strains of HPV can cause genital warts or cancer.

In September 2010, the Oregon Immunization Project added Pacific to their project, which gives free access to the HPV vaccine to women. Since then, Pacific has been able to offer the vaccine for just $15 an injection, which lead to an increase in students visiting the health center requesting to be vaccinated. This vaccine prevents 70 percent of the cancer causing strains and 90 percent of genital wart causing strains, dramatically reducing chances of being affected by a hostile form of HPV. While both men and women can contract HPV, the cancers HPV cause only affect female reproductive organs and it is suggested that women receive the vaccine young, ideally before sexual activity begins.

Those interested should contact the Student Health Center at (503)352-2269 to make an appointment. No exam is necessary but a consultation will be scheduled. 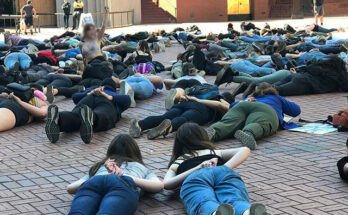 Protesters in Portland lie down for nine minutes June 2 to protest the murder of George Floyd at the hands of police. Police officer Derek Chauvin knelt on Floyd's neck for nine minutes, killing him. Protesters' faces have been blurred to protect their identities. Rev. Chuck Currie