The Pacific University Volleyball team is looking to improve on a 10-14 record in 2015 and a 7-9 conference record that earned them a tie for fourth place in the conference. Last season, the Boxers played a number of exciting matches, including nine matches that went into the full five sets. However, the Boxer’s ended up on the losing side of six out of the nine extra set matches.

“Coming off a year where every win was fulfilling, we are anxious to take it to the next level,” head coach Kip Yoshimura said.

The Boxers are fortunate to be returning many players with experience who will be able to lead the way in the Northwest Conference.

One of these returners includes sophomore middle blocker Ciara Smith, who was named Second Team All-Northwest Conference in her freshman season.

“Ciara had an amazing freshman season,” Yoshimura said. “I don’t know if we have had a freshman make that big of an impact right away. She was a force at the net and unstoppable at times.”

Another player who will be returning to the Boxer lineup is senior libero Lia Zablan who had a career high 357 digs last season. Zablan also added 25 service aces to go along with her high dig total.

“Lia has vastly improved,” Yoshimura said. “It will be nice to have her as a senior leader this year in a key position like libero.”

The Boxers will also be returning many other players that played key roles during last season as well as the new players coming in who will get their chance to play on the junior varsity team if they are unable to make it on the varsity team.

“With a strong returning group and a junior varsity program that had a good year, we are excited for the challenges that this season and the Northwest Conference schedule will bring,” Yoshimura added.

The Boxers will start their 2016 campaign with a three day tournament in Sherman, Texas that begins Sept. 1 at 6 p.m. 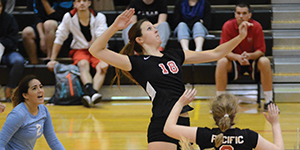