Student Senate selected junior Claire Ramaley and her involvement with Unified Sports for the October Boxer Revolution of the Month.

Ramaley said her parents both being special education teachers has played a major role in her desires to one day work with students with disabilities. Thus, Unified Sports was a great opportunity for her. She has been a part of Pacific’s branch of the program since it began her freshman year.

Unified Sports is a branch of the Special Olympics and as stated on the organization’s website was started to establish the idea that, “training together and playing together is a quick path to friendship and understanding.”

Each Unified Sports team is made up of athletes of similar ages and abilities, with and without intellectual disabilities. Teams currently exist at many educational institutions like Pacific as well as high schools.

“We’re really student-run,” said Ramaley of Unified Sports at Pacific. “So currently, we’re really trying to make a name for it at Pacific.”

Pacific is not the only college in the area with this goal. University of Portland currently has their own team and Pacific recently had a tournament against them, which Ramaley said was very fun. They hope to host a basketball tournament at Pacific against UP in the future.

To prepare for these tournaments, which change in terms of sport based on the season, practices are held once a week. Ramaley, alongside Pacific alumni coaches, Jill Hertel and Abby Coleman, attends and assists the practices with team members who she said are truly competitive.

“This year we’ve got people that actually know how to play the sports,” said Ramaley. “Just because someone has a disability, that does not mean they can’t shoot a goal.”

Ramaley emphasized in other ways why competitive nature is not an issue for Unified Sports, in her eyes.

“Our goal is not to win,” said Ramaley. “It’s to give everyone an opportunity to play.”

Also as the Event Chair for Colleges Against Cancer, Ramaley has seen great growth in both programs she has been involved with over the years.

“Our numbers have increased a ton,” said Ramaley. The team has around 15 members that regularly show up to practices but Ramaley hopes for more in the future.

When asked about whom she would want to join this program in the future, Ramaley said that patience is key for participants and that, “it definitely takes a certain person.”

For now, Ramaley and Unified Sports at Pacific are looking to get more involved with the school but according to her the group does “not exactly know what that looks like just yet.” 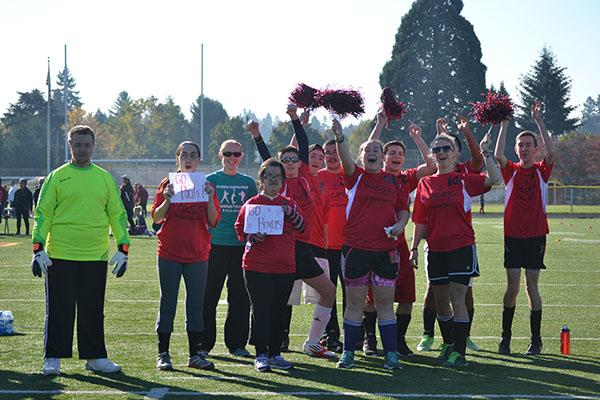