Broadcasting from the basement of the U.C., the 2013-14 Boxer Radio station is making many changes to improve the program and create a widespread influence on campus.

Junior Sterling Bax and senior Haley Rozee applied for the Boxer Radio coordinator positions last spring through ACE Board. Both were accepted and have been working this semester to attract new DJ’s and students interested in having their own talk show.

Both Bax and Rozee want to have more clubs and organizations on campus host their own shows. Currently, Student Senate has a weekly talk show.

Boxer Radio is easily accessed online which allows it to be heard anywhere. International student Jose Saavedra wants to start a radio segment where he plays Spanish music. Also, he is enthusiastic about it because his family in Mexico can listen to his segment.

Bax and Rozee want all students to know that the radio set up is simple and anyone can learn it.

“I didn’t know anything about radio broadcasting before, but I was really surprised at how easy it was to learn,” said Rozee.

Both coordinators will be teaching students how to DJ on Boxer Radio. Once they learn on the radio, students will be given the chance to DJ at campus dances.

Bax said she wanted to be a coordinator because she is passionate about music and she has several new ideas to improve the station.

Rozee saw the potential of Boxer Radio and wanted to help it become a bigger influence on campus.

To listen to Boxer Radio, go to boxerradio.fm. The coordinators also encourage the Pacific community to follow them on Twitter at BoxerRadio and like them on Facebook at Boxer Radio at Pacific. To schedule a show contact Sterling Bax or Haley Rozee. 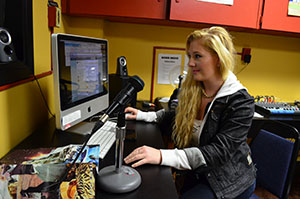