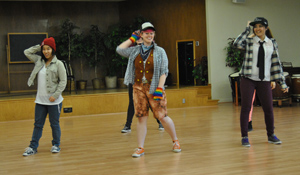 The MPR was overflowing with the smell of yakisoba noodles, the sounds of large drums and students immersed in another culture for Pacific’s Japan Day on May 2.

Those who attended were entertained with several different kinds of traditional Japanese music and even the current popular songs in Japan.

While being entertained, students could sit at a table with different papers and ink to create their own Japanese calligraphy piece. Several tables of food for purchase included noodles, and different options to personalize your own sushi.

Once again, Japan Club organized the event, under adviser Kazuko Ikeda. Students involved in the club helped prepare the food, set up and also took part in all of the performances.

“I felt that this was very easy to organize,” said junior Ka’imi Manner. “We were very fortunate to have a lot of good people planning it.”

It was surprising that the event would be easy to plan, considering the variety of dances and music involved.

“My absolute favorite part of Japan Day are the performances,” said Manner. “Everyone worked really hard to put their dance together just for this one day.”

Most of the dancers began practicing in March. However, for the dances that were not traditional but reflected current popular music, practice began much sooner. One group performed to Korean pop or K-pop and had only begun practicing a week before Japan Day.

“It was a last minute performance but it worked out well,” said Manner, who also danced to Japanese pop group AKD48.

Although performing may have been a breeze, Manner said other difficult decisions swarmed the planning process for Japan Day.The delicious foods that were offered were actually only a few of the options originally available according to Manner.

Although Ikeda is retiring after this, her 30th year as a Pacific faculty member, hopes and expectations for future Japan Days still exist.

“Next year, I hope to have more people attend the event,” emphasized Manner. “We had a wonderful audience on Thursday, but the more, the merrier.”

“I also hope to have more performances and more performers,” concluded Manner. “So look out for an e-mail next spring asking to participate in Japan Day.”