By pulling a card out of his butt crack, comedian and magician Derek Hughes received a standing ovation.

Hughes performed a spectacle of illusion and stand-up comedy on March 16 in the Taylor-Meade Auditorium.

Hughes is an acclaimed magician, whose magic and comedy acts have earned him first place awards in magic and numerous positive reviews from colleges across the nation. He has appeared on TV shows such as VH1’s “Celebrecadbra” and “Masters of Illusion,” and in the movie “Mr. Deeds.” He was the top booked act at the 2010 National Conference for the National Association for Campus Activities, known as NACA.

Hughes’ act at Pacific was tightly crafted and performed in a fast-paced fashion. Hughes used a high energy strategy to make even the simplest magic acts exciting.

Hughes’ expertise and slight-of-hand skills blended with his rapid-fire comedy. His jokes ranged from self-deprecation to observational comedy.

As well-rehearsed as the routine was, he was still able to fire off constant moments of improvisation that had the audience roaring with laughter.

His tricks ranged from simple card tricks to moments exemplifying psychic abilities. Hughes was able to twist old tricks and make it his own, such as making a card disappear and reappear somewhere else.

One of his card tricks involved ripping a card, then finding the card in a tightly-sealed envelope held by an audience member. Hughes engaged with the audience by having many people assist with his magic tricks.

Hughes’ mastery of illusion and comedic genius allowed him to create what can truly be called a unique experience at Pacific. For more information on Derek Hughes, visit derekhughes.net. 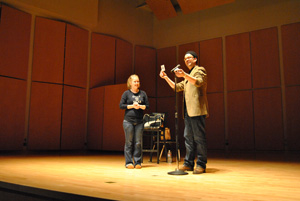