On Sept. 17 at 5 p.m., Pacific University’s football program will make history by playing the first ever NCAA Division III football game in the state of Hawaii.

The game will be the conclusion to a three day event that includes the second annual Boxer ‘Ohana Golf Tournament on Sept. 15, as well as a special reception for Pacific ‘Ohana Friday Night at the Manoa Grand Ballroom.

The game will be played Saturday night at the Kunuiakea Stadium on the campus of Kamehameha Schools Kapalama. The Boxers will be taking on Occidental College of California in the historic game.

It’s no secret that Pacific is home to many residents from the Islands. Pacific has over 3,000 alumni and 400 current students from the state of Hawaii, as well as the second highest number of Hawaiian resident football players, with a total of 28.

It’s safe to say there is an excitement amongst this year’s Boxers to get the chance to go back home and play in front of friends and family.

“It’s just the feeling of being back home again,” junior cornerback Max Look said. “I want to put on a show for my family. I want to do it big to show them what I’m doing and how hard I’m working.” 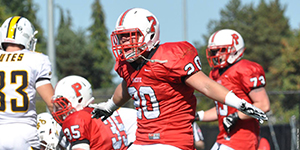 The game will be a big moment for a lot of the Hawaiian Boxer players as they play for the first time back in their home state since high school.

“The last time my family saw me play was in high school so I’m excited to have them there,” junior wide receiver Chad Aragon said. “I know it’s going to be a huge game, not just for me, but for everyone who is from Hawaii.”

The Boxers have a lot of returning players on the defensive side of the ball who expect to rely on their experience this season.

Offensively however, the Boxers will see a lot of new faces, including a new starting quarterback and many young receivers.

Despite the inexperience, Aragon expects the younger players to be ready to go when the season starts.

“As a receiving core, we are young and as a veteran it’s now my responsibility to make sure these boys stay in there and keep their minds right,” Aragon said. “I know these boys can ball out, they just have to do it every day, not just one day here and one day there.”

Both Look and Aragon have high expectations for not only team as a whole, but for themselves individually.

“I’m trying to make all conference, make first team and I’m trying to score at least two touchdowns every game with 200 yards,” said Aragon. “I may fall short, but I shoot high and chase perfection. They say that it’s impossible to be perfect but it’s something that I chase after and I want to be the best I can possibly be.”