The Boxer baseball team is currently 12-9 in conference play and 20-13 overall despite not playing a home game until April 2.

The Boxers had a battle with record rainfall and a faulty drainage system that forced them to play 12 home games at the neutral site of Ron Tonkin Field in Hillsboro, Oregon. However, resilience prevailed as the baseball team won 10 of 12 at Ron Tonkin.

“We don’t care where we are, we started calling ourselves the road warriors and embraced it,” senior Eric Purcell said. “We just take it one game at a time.”

Athletic Director Ken Schumann said that five years ago a state of the art drainage system was installed under the baseball and softball fields. While the softball field had no problems this year despite the record rainfall, the rain took a toll on the baseball field. 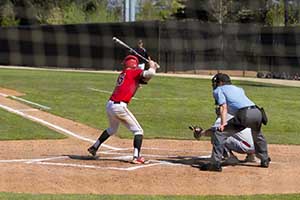 The second layer, coupled with record rainfall, contributed to the lack of home games for the Boxers.

Schumann said that the athletic department is working hard to fix the issue by contracting a company to take care of the matter. He said the company has put lime on the field which helps break down the layer of build up.

They will continue to provide help in regard to the drainage system until the problem has been fixed. “Generally speaking, many colleges and high schools in the northwest are installing turf baseball fields because of the sheer amount of rainfall that we get here,” head coach Billings said.

“It’s been magnified this year by the record amount of rain that we’ve had,” Billings said. “With that said, we are very proud of, and grateful for our baseball facilities at Pacific. We feel very fortunate and we are much better off then most of our competitors.”

Schumann said that there is a possibility of a turf field in the future but the grounds that the baseball field sits on is owned by the city of Forest Grove, so a dialogue with the city regarding the change would be required.

He added that though he is a baseball purist, a turf field would cut down on rainouts, field maintenance and it would allow the team to practice on the field more often and earlier in the year, thus opening up the field house for other things to be scheduled.

Now that the rain has let up, the Boxers have played four home games, with more coming soon. The team faces Whitman University April 16 and 17 at home.