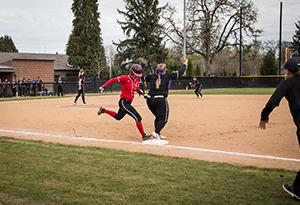 Dascha Marenco
The Pacific University softball team has passed the halfway point in their season and is tied for second place in the conference with 19 wins and nine losses.

“Leadership was a major key to our good start,” said junior Allie Sims. “The team has all come together, and with seven seniors, we really used to that to our advantage.”

One of the seven seniors is pitcher Marissa Reichard, who leads the conference in two pitching categories.

“Reichard has been pitching really well, and our lineup had established good team hitting,” said Sims. “With just six conference series weekends remaining, and the schedule winding down, it will take heart and determination, to focus and make sure we stay on track.”

After coming off a series split with the number 16 ranked Linfield Wildcats in Forest Grove, the team traveled to Spokane to take on the number 24 ranked Whitworth Pirates.

After dropping games one and two on the first day of their trip, the Boxer women came out on top in the first game of day two, winning 9-2.

Trying to hold onto their second place conference record, the women would drop a nail biter to the Pirates 4-3, allowing the winning run to score in the bottom half of the last inning.

The Boxers are now tied for second with George Fox, who has a conference record of 19 wins and nine losses.

The Bruins will be coming to Forest Grove April 3 and 4, in a series that is sure to shape the outcome of the conference.

Pacific will then finish their regular season with Lewis & Clark in Portland April 9 and 10, and the season finale with Willamette, playing two games in Salem on April 16.