Tommy John Surgery is an epidemic that has hit the baseball scene in a massive way in recent years. Almost one third of all Major League Baseball players undergo Tommy John.

Tommy John is a reconstructive surgery to the ulnar collateral ligament. If the ligament is fully detached there is an eight-month to one year recover process. The American Sports Medicine Institute confirmed that the rate of Tommy John surgery has gone up 32 percent since 1995.

The injury is becoming more prevalent among young athletes. Tommy John affects youth baseball players and up to the professional ranks.

“My belief is that there is an equation of capacity and load. When the load you are putting on your body out weighs the capacity to handle that load, you will get hurt,” Doctor of Physical Therapy and Pacific University grad, Kent Morimatsu said.

Morimatsu said that there has been definitely an increase in Tommy John over the past. He added that the injury is affecting too many athletes and does not have one single factor.

“The truth is that we do not really know why,” Morimatsu said.

Tommy John has not avoided Pacific athletes. Sophomore Ryan Colson said it has had a major impact on his college career.

Colson said that he felt a pop in his elbow when he was hitting and now three years later after fighting through pain, has had Tommy John surgery.

Colson went to multiple doctors that misdiagnosed him before he was given the correct diagnosis.

“I didn’t really know what was wrong with my elbow for a while,” Colson said. I kept playing for three years and eventually the pain got so bad I had to go into the doctor.”

Colson said he doctors missed his tear because the ulnar collateral ligament tore from the backside.

When the tear was finally found, a 70 percent tear appeared.

On top of the tear, Colson suffers from an ulnar nerve issue where his nerve has been displaced. Colson said his recovery will take longer than the standard UCL tear because of the nerve problems. Despite the circumstances Colson said he is optimistic he will start his throwing program in a few weeks.

Shoulder surgery is also a common injury amongst baseball athletes.

Melton said that he tore his labrum in his junior year of high school and missed his senior season.

The long road to recovery forced him to take an ample amount of time off. The labrum stabilizes the shoulder so when a tear is present the shoulder becomes loose.

Melton said that he now suffers from shoulder instability. This led to a second surgery in December 2015.

Melton said his surgery will keep him out of the game through summer and coping with injuries and the recovery process is never easy.

“It’s pretty tough to be honest.” Melton said. “There are days where I am wondering if my shoulder is just going to give out again.”

Melton said he believes shoulder surgery is too common and effects too many young athletes. He said he thinks that throwing form is crucial for baseball players but playing year-round may not be the best. 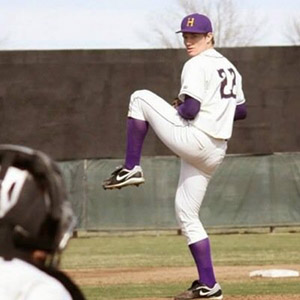