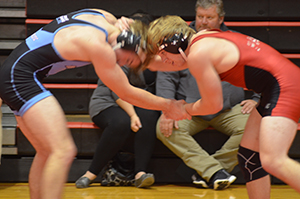 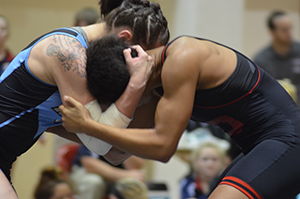 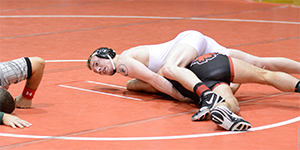 The Boxer wrestling team took to the mat on Nov. 8 to compete in the annual Mike Clock tournament along with a dozen other teams at a packed Stoller Center. Twelve wrestlers of coach Severin Walsh’s team competed and went 13-24 on the day. Senior Shawn Speer (above) pins his opponent and continued on to the quarterfinals until falling to Oregon State’s Izaak Tobin in the 141lb weight class. Freshman Cody Sandridge (157) (bottom left) snaps his opponent’s head down and would later win this match against Warner Pacific. Junior CarrieAnn Randolph (136) (right) fights for the inside tie against her opponent. Randolph dropped a tough 12-11 decision in the consolation bracket to Sydney Norvell of Southern Oregon. Senior Bailey Martinez (bottom right) wrestling at 143 pounds, went 3-1 for the day, cinching the bronze medal. The men’s team will travel to compete in the Spokane Open on Nov. 22 and the women will not see action until December 5 with a dual against Warner Pacific.