Since men’s soccer is coming to an end, Ian Farley shares his experience of playing all four years for Pacific’s men’s soccer team.

Even with moving from Arizona to American Samoa and then finally to Washington soccer stayed in his roots no matter where he went.

Farley started playing when he was really young and has not stopped until his senior year soccer season came to an end.

“I started when I was five or six,” said Farley.

Even though soccer was the sport of his choice, he also participated in track for a year and really enjoyed it.

Since soccer is something that Farley is so passionate about he has thoughts about continuing to play or potentially coach after he graduates.

“I will definitely continue playing. Whether that’s at a highly competitive level depends on a lot of factors,” said Farley.

Like many soccer players and football players, many travel abroad to tryout for professional teams, which is something Farley is not opposed to.

With future goals in mind, physical goals also played a factor for Farley. There have been many soccer games played, but there have been two times that Farley has made the winn 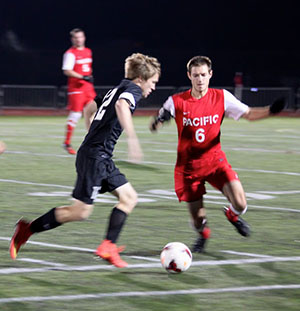 ing goals: once against Whitman University and the other against the University of Puget Sound with just minutes remaining.

“To me, soccer is love,” Farley said. “Soccer brings joy to hundreds of millions of people worldwide every day, most importantly to those who otherwise have very little cause for joy in their lives.”

Farley said he always plays for the joy of the game.

Being mentally tough is something that players struggle with and have to fight through to be capable college athletes.

“The most successful players are the ones that win this battle and overcome the adversity caused by a poor performance, injuries, issues with teammates and so on.” said Farley.