With election day coming up, people are finding more ways to encourage others to vote this year. Whether that be through social media, phone banking, protests, or just casual reminders during conversations. One woman though, decided to take matters into her own hands and remind the public to vote in her own way.

If you drive down Pacific Ave towards Hillsboro, you might catch Cindy Bronson sitting on a lawn chair in front of the Dollar Tree and Safeway holding up signs pointed towards traffic. She sits there by herself hoping to spread the word and convince people to “vote him out,” as one of her signs say.

Bronson used to work at Pacific University for a few years but unfortunately had to leave her job when COVID hit.

She makes it clear that she is out here protesting by herself because she is very frustrated with the government and how they are handling things in the country. She feels that this is the only way for her voice to be heard. Bronson has been coming out as often as she can in the past month or so.

“Go and vote! Please vote. You have to vote. It’s the most important thing right now,” said Bronson as her message she wanted to leave for students at the university.

The Forest Grove Library is right across the street from Pacific University, right between Ash Street and Birch Street and has a drive up drop box for your ballots. It takes about a minute to put your ballot in the mailbox and drive off, it can even be done in between classes. — Ashley Meza

Photo: If you drive down Pacific Ave towards Hillsboro, you might catch Cindy Bronson sitting on a lawn chair in front of the Dollar Tree and Safeway holding up signs pointed towards traffic (Ashley Meza) 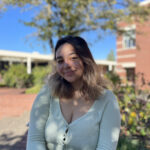 One Comment on “The Importance of Voting on Campus”