One day, Asian cuisine might tempt you, while another day Mexican food might be right up your alley. Whatever the occasion may be, small college towns need to cater to their diverse population in case students decide to venture off campus to grab a bite to eat.

For Pacific University students, this is not an issue. In the last six to nine months, three new restaurants have opened up in downtown Forest Grove. Bites, a tapas restaurant ran by a Pacific graduate, Migets Island Grill, a simple selection of Hawaiian and Southeast Asian food and Kama’aina, an authentic Hawaiian restaurant with a local food store attached, have all recently popped up within walking distance from campus.

“I decided to have a tapas concept because I enjoy eating and I feel like when you have a bunch of small plates to try from you get a better culinary experience rather than just one large entree that fills you up,” Bites restaurant owner Thomas Gilstrap said. “I remember when I went to University of Oregon that I was always looking for restaurants like these to go out to eat at.”

But Gilstrap is not the only one who favors having variety.

Howard Sullivan, executive director of the Forest Grove and Cornelius chamber of commerce, applauds Forest Grove for their diverse range of places to eat.

“You’re one block off campus and you got some pretty eclectic restaurants,” Sullivan said. “Think of Forest Grove, a city of 23,000 people. You got sushi, you got Thai, you got Mexican, you got Hawaiian, you got Island; you [would] think you were in a bigger city.”

But variety is not the only positive thing Sullivan has to say about Forest Groves eateries. He thinks the reasonable prices “fit a college student’s pocketbook,” an important aspect to the success of restaurants in the area.

Sullivan recalls the restaurant atmosphere back when he was a student at Pacific.

While the restaurants have changed frequently, he used to enjoy going out to eat with his fellow athletes.

He was thankful his Resident Assistant made it a mission to take them out to eat because it allowed them to explore and become part of the Forest Grove community.

“You get tied to the community and you have a better relationship with the community [because] you’re not just at school going to school, you are getting the full experience,” Sullivan said. “I think students will find that restaurants are very open to students coming there.”

And for students who are 21 and older, there are quite a few options for them as well.

There are places such as Waltz Brewing, Bull Run Cider and a new brewery, Ridgewalker Brewing.

Ridgewalker Brewing, which opened Wednesday, Aug. 10, threw their doors open without any official advertising this summer.

“We definitely want to cater to the students and have it be a place for them to come to whether its for studying or coming in the evenings with friends to enjoy some beer or BBQ food,” Tap Manager Jeff Farrar said.

This brewery offers discounts to Pacific students, plugins and study nooks, over 30 taps including cold brew, kombucha and wine, with plans to add a brunch option as well.

Their goal to cater to Pacific students, like many other restaurants in Forest Grove, is something Gilstrap, owner of Bites, wants to reiterate as well.

“I feel like students are afraid to come in and try because everything might appear expensive but we intentionally priced our menu with the student body in mind,” he said.

Likewise, Mike Marshall, owner of Migets Island Grill, encourages students to stop in and have the Pacific special, a smaller portion of their regular plate of meat, rice, macaroni salad and limpia for $6.50.

“I’m hoping more students will come in,” he said. “I think it will pick up more since more people know about us now.”

Kama’aina is also planning to add a Pacific special to their menu at the end of August. Since a majority of their customer base are students, they are planning to add daily student specials. 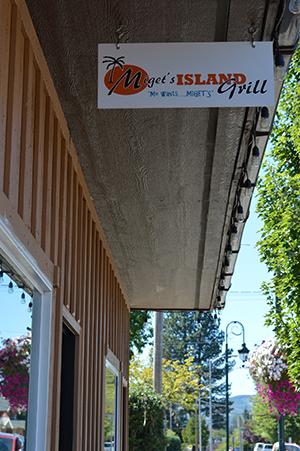