Senior Michael Zane found inspiration for his art before working toward his undergraduate degree. He has become a popular tattoo artist on campus, specializing in Polynesian tribal designs.

“My interest in tattooing began when I was a sophomore in high school,” Zane, a native of Hawaii, said. “I got my first tattoo on my leg and was really inspired by the artist who did it. I ended up going back and getting an apprenticeship at his shop for six months.”

As an apprentice Zane cleaned the shop, learned about the art and did a lot of vigorous drawing.

“I would draw on various surfaces including fruit, pig’s skin and people’s skin with sharpies,” Zane said.

After the six months as an apprentice, he was hired.

“While working at the shop, I got a good feel for the employment and what being a tattoo artist entailed.”

His inspiration to be a tattoo artist came from his mentor who he apprenticed under.

“He really pushed me to improve myself as an artist but at the same time he let my art be its own form. He is really supportive of me,” Zane said.

Zane has three tattoos that he mainly designed himself. He designed elements of his arm sleeve, but his rib piece and leg sleeve are his original creations.

Zane came to Pacific knowing he wanted to be a studio art major.

“I entered as an art major and am graduating with an art major. As soon as I graduate I’m going to go back to the shop with my mentor and work full time, tattooing as much as I can and improving myself with every tattoo I do,” said Zane. 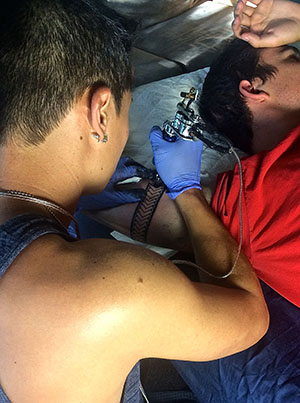